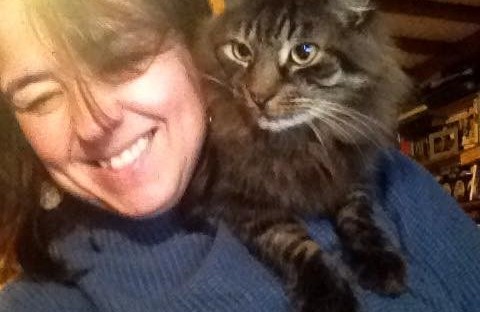 Perhaps one of the most delightfully eccentric works in the English language, Jubilate Agno by Christopher Smart (1722–1771) pays tribute to the poet’s ‘Cat Jeoffrey’:

For God has blessed him in the variety of his movements.

For, tho he cannot fly, he is an excellent clamberer.

For his motions upon the face of the earth are more than any other quadrupede.

For he can tread to all the measures upon the musick

For he can swim for life.

For he can creep.

Jeoffrey was clearly a very special cat indeed, and Christopher Smart’s tribute to him shows the place he held in the poet’s affections. While Smart was in fact locked up in a lunatic asylum for some of the time during which he wrote Jubilate Agno, I think many of us can probably empathise with this particular form of madness: if you have a pet in your life, the chances are you love that animal to distraction.

Which means it is heart-breaking when anything happens to them.

A couple of weeks ago, my other half and I discovered that our beloved cat Bramble had been killed by a train. It came as a huge shock – we also have an aged lurcher-lab cross who has various health issues, and have been preparing ourselves for what lies ahead for her; so the loss of Mr B – a characterful cat in his prime – came like a bolt from the blue. Terrible as it sounds, I’ve been to a few funerals in recent months, and losing my little cat has affected me as much as any of them.

It also made me think that, for all that cats are maligned for the damage they undoubtedly can do to wildlife, nothing really compares to the destruction that humankind can commit pretty much absentmindedly while going about our business on this planet.

I suppose all we can do is to carry on doing our bit individually and collectively, however small, loving and caring for the domestic animals in our lives as best we can – as well as the animals on the fringes, visiting our gardens, hiding in the woods, brightening our world.

One thought on “For the Love of Pets”

This site uses Akismet to reduce spam. Learn how your comment data is processed.