I went to walk the dog at lunchtime and realised that sheep were grazing along the ridgeway where I had intended to take him. So I kept him on the lead and meandered along the lanes instead, past a clear, shallow stream and around a pond where we startled a pair of  ducks, hidden under the branches of willow.

Behind the hills, the sky was bruised blue, but the steep grassy slopes glowed in the winter sun. I paused and thought how lucky I am, to be here, in such a beautiful place.

Earlier in the week, a friend reminded me that happiness springs from gratitude, rather than the other way round – advice I intend to take with me into this new decade. I want to remember to use gratitude as an active principle, seeking out the good and then treasuring it.

In a year baptised in fire and flood, warmongering and violence, whatever else 2020 brings, I hope it brings you many small wonders to light the way through the dark.

This morning, I was walking along a wooded ridge when I spotted my first violets of the year, pale in the thin sun. As with the first sight of snowdrops, the discovery made me smile; spring flowers feel like a kept promise.

When I got home, I looked up the violet in The Language of Flowers; or, Flora Symbolica, by John Ingram, which lists the traditional meanings associated with plants.  I came across my copy, published in 1887, in a second-hand bookshop, and discovered that an earlier owner had pressed scores of dried flowers and leaves within its pages like fragile, antique bookmarks. 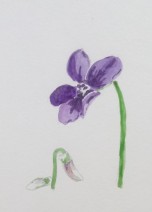 While there isn’t a pressed flower to mark it, the entry for the violet is much longer than for many of the others – somewhat ironic given that the violet is often associated with modesty, as well as faithfulness. Poets from Homer to Keats have celebrated it, and myths have been woven around it. According to The Language of Flowers, the Greek goddess Artemis transformed Ia, daughter of Midas, into a violet to conceal her from the amorous intentions of Apollo; while Jupiter caused the first sweet violets to appear as sustenance for poor, hapless Io, when she fled in the form of a white heifer from the wrath of Juno. So in this way the violet is linked to concealment, of beauty creeping beneath notice.

Yet with the arrival of spring, violets sometimes cluster in abundance on hedge banks and around the roots of trees in woodland; where one might be invisible, together they attract attention. They bloom all around the garden here – in paving cracks and flower pots, roots taking hold tenaciously; then, when the flowers are faded, their brittle pods scatter seeds far and wide. Small yet rich in colour and fragrance, they appear where it suits them; an unasked for gift. 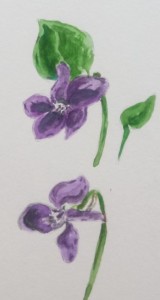 The autumn rain has awoken a lingering ghost in the garden. A tuft of honey fungus has sprouted where an apple tree once stood ten years ago. The common name given to three closely related species – A. mellea, A. bulbosa and A. ostoyae, honey fungus is feared by gardeners for its ability to kill a wide range of trees and shrubs. Yet, while it doesn’t taste of honey, the young caps with their white gills are edible when well cooked.

At this time of year, fungi spring up as if by magic, here one moment and collapsed in puddles of decay the next. While walking in the woods today, I came across peeling caps of fly agaric, the poisonous, red-and-white toadstool of fairy tales. Their appearance was another reminder of what lies hidden, ready to surface when conditions are right.

Neither animal nor plant, mushrooms and toadstools are the fruiting parts of mycelium, the fibrous white bodies of fungi buried in moist soil and rotting wood. Forest ecologist Suzanne Simard has discovered how trees use underground networks of fungi to communicate with each other and send each other nutrients, likening the systems to our own neural and social networks.

The reappearance of fungi at this time of year also fits with the traditional celebrations of Samhain or Halloween, when the veil between worlds of the dead and the living is believed to become less opaque, and the past returns to haunt us. In my own dreams in recent weeks, buried memories have been resurfacing and I have found myself waking in anger at perceived wrongs.

So, what to do about returning ghosts? Folklore advises us to treat them respectfully – and then, perhaps, they might just help us, rather than harm us. Now is the season to honour the past.

Nightfall turned me into a ghost. It had been so hot, I’d dressed in white and hadn’t thought to change into more suitable clothing for a late evening walk. Now my husband was a little unnerved as I appeared to be floating across the field towards him.

With the twilight came the dusk chorus, dark’s answer to the dawn; in the woods, owls hooted and screeched. There was rustling close by, perhaps deer or a badger stirring, as the night woke up.

I’d hoped the day’s heat would be enough to light up the hedgerows, and I wasn’t disappointed. As we started down the track, we spotted the first tiny flicker: a glow worm suspended from a blade of grass. Further along, we found another and another deep within the hedge, fragile greenish-white dots of light.

It’s no wonder folktales abound about faeries. Midsummer Eve, a painting by the English artist Edward Robert Hughes (1851-1914), captures and transforms the charm of these dabs of hedgerow brightness, which cast their own faint shadows. 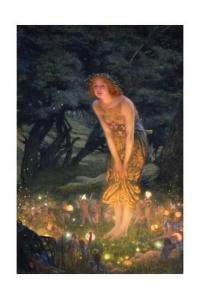 Of course, in traditional tales, fairy folk or, as they are also known, the Sidhe (‘The Good People’), are much more ambiguous beings than the merry crowd depicted in Hughes’s picture, and best not crossed…

Although neither fairy folk nor indeed worms, glow worms are similarly best left undisturbed in their natural habitats. Their bioluminescence is mainly generated by the female beetle (Lampyris noctiluca) with the aim of attracting a mate. In England, the best time to see them is between June and August – and  those up the lane certainly seem to be more active on balmy nights.

All the same, while they might be firmly of this world, glow worms nevertheless seem to suggest that, on warm summer nights at least, a little magic might just be possible…

Drenched fields hold pools of sky and, in the surrounding farms, the cattle are restless in their byres. There is a tension in the air. One day the sun is out; the next it vanishes behind banks of cloud. Yet the birds are beginning to sing of spring, with the great tit’s two-syllable ‘It’s com-ing, com-ing, com-ing’; and pairs of jackdaws have started to make their nests in the outbuildings.

This past week, where others catch colds, I’ve found myself infected by anxiety. A couple of delayed projects meant my work temporarily dried up. Such are the joys of life as a freelancer: one day you’re drowning and the next you find yourself in a desert. Rather than stay fretting at my desk – or doing the sensible thing and phoning around for jobs – I went in search of water.

Over the course of the next couple of days, I walked for hours along the footpaths that crisscross the River Stour in the heart of the Blackmore Vale, a landscape immortalised in Thomas Hardy’s novel Tess of the d’Urbervilles. It’s flat and lush pastureland. The farms are large and ancient, and the river ribbons its way between them.

Along the way, I saw herons and egrets, skirted an ox-bow lake and was befriended at one point by a perky white terrier (whose owner I had to phone to come and fetch her, so keen was she on accompanying me across the fields).

And it struck me how hard it is to feel like a failure when you are walking: when you are simply moving one step at a time across the land and engaging with what you see, rather than worrying about what you should be doing or what you think you ought to have achieved. Equipped only with a map and a sense of direction, it can be easy at times to lose sight of the way markers – especially when you are trying to tiptoe your way round farmyards – yet somehow you always find the right track, even if it’s not the one you intended.

When I realised I’d just spent the last 10 minutes by the window, staring at a rodent that was fine-dining on the fat crumbs from the bird feeder, I decided I probably needed to get out more. To be fair, the rodent was a bank vole – that round-eared, snub-nosed cousin of the mouse – and it was a lot more interesting than your average hamster. But even so.

I’d finished work that afternoon on the first draft of a text, and my brain and eyes were aching from pushing words around. In fact, I was beginning to feel a little like the Jack Nicholson character in the Shining typewriter scene – ‘All work and no play…’

Fortunately, while being a freelancer can be a risky, feast-or-famine and occasionally lonely business, one of the perks is that you are, after all, your own boss. If you need to take a few moments out, there’s no one to tell you that you can’t. I pulled on my parka and headed through the door.

It started to rain – but no matter. The light was a curious cast of brilliance against dark rolling clouds, and the horizon was smudged by the tail of a rainbow. By the time I reached my destination, the drizzle had cleared and the sky had cleared to blue. The trees were bare, but out on the lake a pair of willows burned like two torches, their reflections catching fire in the water.

As I walked, I let go of the day’s trivia. And for a moment I experienced that sense of freedom which carries with it an echo of childhood – of just being. It didn’t last long, but it was enough.

Today, I made a point of going for a quick stroll at lunchtime. Just down the lane and into the fields, squelching through mud. And, yes, it rained and, yes, I got soaked. But again it didn’t much matter. I returned to my desk feeling alive and awake – and promising to give myself permission to get out more. To live a little.